The Thracian Lowland area includes the central part of the lowland, as well as parts of Sakar Mountain. It is characterized by a temperate-continental climate and favorable distribution of precipitation. Typical Bulgarian wines from this region include Mavrud, Rubin, Melnik, Misket, Tamyanka and Pamid.

The Rose Valley is located between the Balkan mountain and Sredna gora and it produces mainly white dry wines. The Rose Valley is birthplace of the Red Misket – a variety of white grape with pink skin which produces white aromatic wines similar to those of the Muskat family. Among the most famous grape varieties in the region are Merlot, Cabernet Sauvignon and Riesling. 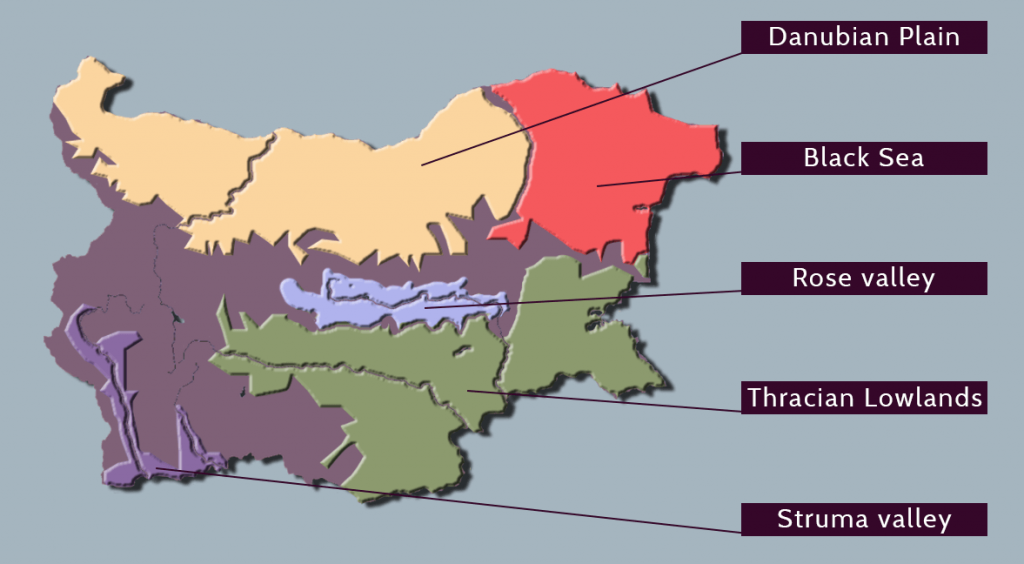 The Danubian plain covers the southern bank of the Danube river and is characterized by a temperate-continental climate, hot summers and sunny days. Commonly grown vineyards in this area are Merlot, Pamid, Cabernet Sauvignon, Gamza, and Muscat Otonel.

The Black sea region is characterized by mild autumn which allows growing white varieties with a high sugar concentration. Dimyat, Muscat Otonel and Sauvignon Blanc are among the most common vineyards in the area. Of the reds, Pinot Noir is definitely the star of the region.

The Struma Valley includes the valley of the Struma River and is part of the historical region of Macedonia. The climate is typically Mediterranean, with mild, rainy winters and hot summers. Typical grape varieties traditionally grown here include Melnik, Cabernet Sauvignon and Merlot.